The end with snot and mucus in feed and water tanks.

UV light is effective at keeping all types of tanks and containers clean of fungi, bacteria and coatings. 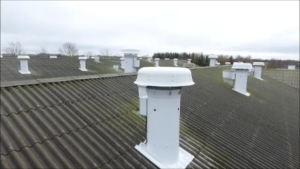 Denmarks largest ventilation system with UV treatment on the air intake, have taken biosecurity to a new level.
The system at Molsgaard is dimensioned, delivered and in stalled in a collaboration between SKOV and NATDIS. All ventilation on the farm has been converted into a controlled overpressure system, so that the air is controlled and unintentional intake of infected air is avoided.

Hear more about your options – contact us for an offer on a total solution.

Se more of our products demonstrated on Youtube here